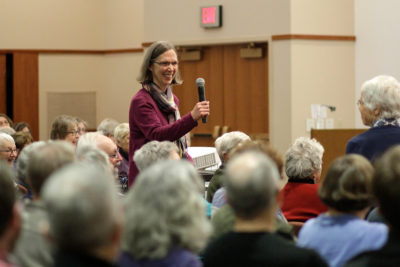 Warmed by a wood stove in an old Civilian Conservation Corps barracks, a group of Madison-area naturalists gathered in the winter of 1968 on the grounds of the University of Wisconsin Arboretum to hear about the latest ecological research they could share as they led tours and walks in natural areas.

Unknowingly, they were also laying the foundation for the Arboretum’s broad commitment to lifelong learning.

Fifty years later, the UW Arboretum is celebrating a half-century of winter enrichment lectures, which attract more than 150 people each Thursday to learn about a breadth of ecological, natural and social science topics, including the latest research, discoveries and personal stories. What began as training for local naturalists has evolved into a seminar series that welcomes the public, builds friendships, and drives anticipation for spring as it shares knowledge about Wisconsin’s environment.