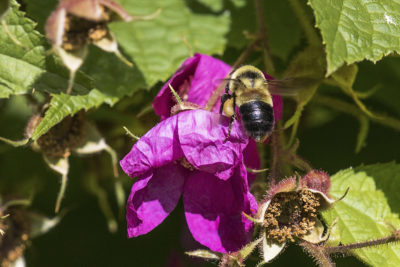 The rusty-patched bumble bee (Bombus affinis) flies between flowers at the UW-Madison Arboretum in Madison, WI. Thursday, July, 6, 2017. It was officially listed as endangered under the Endangered Species Act on Tuesday, March 21. (Photo by Hyunsoo Leo Kim | University Communications)

“With a trained eye and quick finger stabbing the air, University of Wisconsin–Madison Arboretum native plant gardener Susan Carpenter counts off the bumble bees buzzing in front of her.

“‘The two-spotted, the brown-belted, the common eastern—which has just that one yellow stripe,’ Carpenter calls out to the scientists, government officials and prairie restorers gathered around the flowering St. John’s wort.

“Following the listing of the rusty patched bumble bee as an endangered species in March, more than two dozen people—including representatives from the Wisconsin Department of Natural Resources and the U.S. Fish and Wildlife Service—had come to the Arboretum to learn how to use photography to identify pollinators. The workshop was designed to help land managers document the range of the threatened bee and to track other native pollinators.”